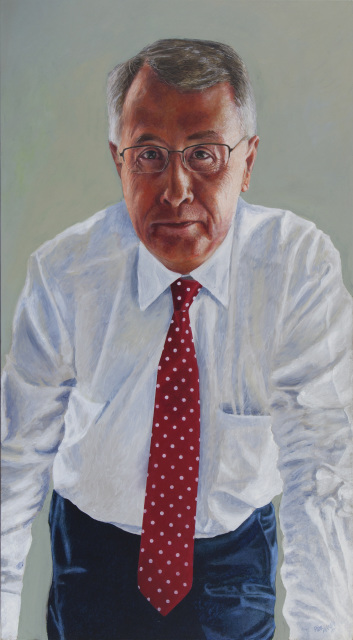 Wayne Swan was an easy choice; he is after all, our local member. I had met Wayne on many occasions, but I had most contact when I had my art gallery in Nundah. Like most of the ‘good’ politicians; he took time to say hello and ask about my business, he always remembered my name and treated me with interest and respect.

The sitting was booked for the morning of 21 December, 2012, the day after Wayne, then Treasurer of Australia, had to concede that he would not be able to produce a budget surplus.

I chose Wayne because he’s a real bloke, no frills, no guff, just a straightforward ‘get the job done’ kind of guy. He had previously tried to get help for me to keep my art gallery open, and I am forever grateful for that. I really wanted to offer an image of him to the future that current media failed to show.

There are no secrets or codes to this painting, it is an earnest representation using the best of my skills to show ‘the man’. The painting is engaging; Wayne looks right at you, he is not threatening, just asking a question, I think its “how can I help”?

The painting is not about politics, it is about a bloke. I chose the lighting to bring the focus forward ‘off the canvas’ to give him a presence. The hands are missing, as is the table he was leaning forward on. I wanted everyone to look at his posture; this business-like stance says it all. The size and format of the painting work really well, it was perfect for creating the presence I needed.

I’m hoping that what people see is a good likeness of the man, but more than that, I hope that they have an emotional response. Some will like it, others will hate it, I hope that those people don’t colour their opinions with politics. He is a well-known public figure and the work is a good opportunity to show a side of him that most people would never have the chance to see. I know him as a bloke who has been trying to quietly get on with the job. This painting is not intentionally political, it is about the man. The pose is pensive, thoughtful, he shows a little impatience and frustration with my requests for poses and looks a little awkward while receiving this type of attention.